Pepcid for Asian Glow/Flush: I did it for years – DON’T!

By Kelsey ChanJuly 24, 2021January 26th, 2022No Comments
For years I took Pepcid for Asian glow. After tons of experimenting in college, it was the only thing I could find that alleviated my glow. If you’re Asian and you get red when you drink, chances are you are experiencing alcohol flush reaction, which is your body lacking activity by an enzyme called aldehyde dehydrogenase 2 (ALDH2). Put simply, your body is telling you to stop slow down, stop drinking, and hydrate.

After experiencing this for the first time, it’s highly likely that you have taken or been told to take Pepcid ac or Zantac before you drink so you don’t get red. While that can reduce or prevent the redness when you drink, it’s also proven to be very dangerous and doesn’t solve for the other side effects of alcohol flush, such as an increased heart rate, headache and nausea. 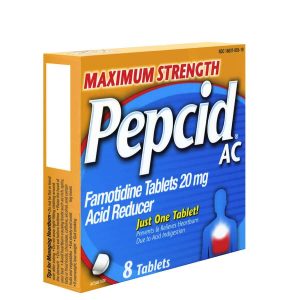 How does Pepcid interact with Asian Glow

Pepcid AC and other similar medicines like Zantac and Tagamet work for redness because they are histamine blockers and antacids, helping to slow down the body’s digestion. However, studies have shown that “using [these products] to reduce the ‘Asian flush’ can escalate alcohol intake and increase the risk of stomach cancers, esophageal cancer and a type of skin cancer called squamous cell carcinoma,” said Davies, a professor in the Titus Family Department of Clinical Pharmacy at the USC School of Pharmacy. Specifically, “the use of H2 blockers may allow someone suffering from Asian glow to drink higher levels of alcohol, but this person shouldn’t do that.”
As we learn more about alcohol flush reaction and the dangers of using Pepcid, Zantac, Tagamet, and other antacids to prevent it, we have designed the Glowless patch to target the root cause, versus masking the symptoms. By using a unique set of vitamins and delivering them to your body through a topical patch, we are able to safely help the liver break down the toxin (Acetaldehyde) effectively and efficiently. Not only does our asian glow patch alleviate side-effects, but it also minimizes hangovers the following morning. If you want to learn more about this, read more about why your face turns red when you drink.
Learn More
References:
https://news.usc.edu/112489/antihistamines-prevent-asian-flush-the-red-face-some-people-get-from-alcohol-but-with-huge-risks/
Share Tweet Share Pin

Please drink responsibly. For external use only. If skin irritation develops around patch area, discontinue use. Consult your physician prior to use if pregnant, nursing, or on medication. These statements have not been evaluated by the Food and Drug Administration. This product is not intended to diagnose, treat, cure, or prevent any disease.
Made with ♡ in Portland